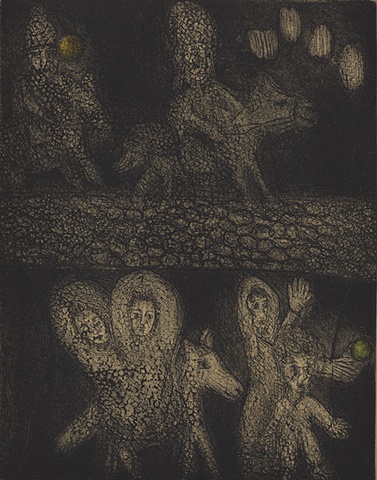 Please inquire about other prints in this series.

This is how I picture my grandmother’s escape from Malatya, Turkey around 1924. In 1915, my great grandmother gave two of her daughters to the Turkish family next door so that they could avoid the deportation/genocide. They lived there for 10 years. They “pretended” they were Turkish (converted to Islam). They worked as “maids” for the family. This is all that was ever said about those ten long years. Around 1924, my grandmother’s paternal aunt (her “Horkor”) and her son went back into Turkey to rescue my grandmother and her sister. My grandmother said they escaped in the night on a donkey through tunnels under the city. They could hear the hoof beats of soldiers’ horses above them.

I found out later that Malatya is built on an ancient city, and does indeed have tunnels underneath it. I also discovered that it must have been quite dangerous for my great aunt to go back into Turkey at this time. Malatya was at civil war, with Kurdish fighters vying for control of the city.